Norway and Russia didn’t settle their maritime boundaries until 2010 in a bilateral agreement.

The Soviet Union (now Russia) wanted the so called sector line; in principle a line from Soviet’s westernmost point going straight up to the North Pole. Due to the ‘Svalbard box’, this line was however not quite straight.

The median line, defined by where the distance from the two countries coasts (or rather, the base lines) is the same, would be a natural default (at least from the Norwegian point of view). Let’s create the median line and see how it plots compared to the 1)sector line and the 2) agreement from 2010.

I’ll be happy to post the script on request - it’s a bit messy and needs to be conditioned before shared. 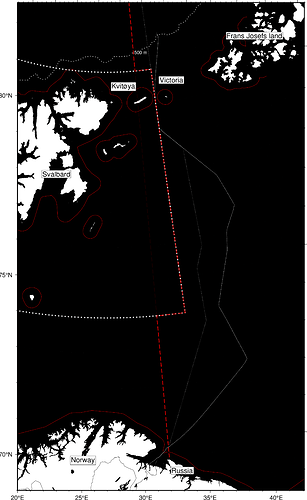