Star map for location of astroimages 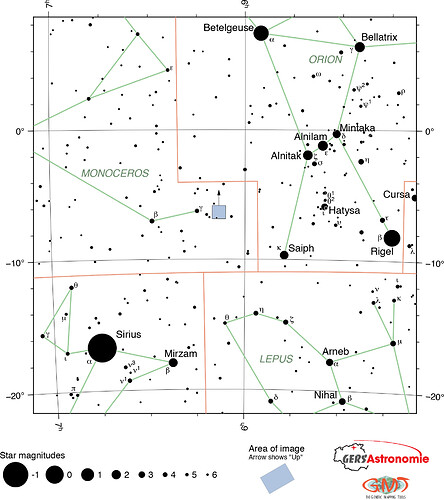 I make images of astronomical objects and want to show the image location on a local star chart. The process is semi-automatic, and passes via a spreadsheet.

First I generate an astrometric solution to the image in my processing software, PixInsight (it does this by matching the image to star catalogues). The solution appears in PixInsight’s console as the coordinates of the centre and the four corners, in Right Ascension and Declination. The posiiton angle of the image is also given as a separate entry.

Astronomical coordinates are like geographical ones except that the longitude equivalent is measured in hours, minutes and seconds, and runs in the opposite direction to longitude.

In the spreadsheet all the items needing manual entry are coloured red (to make it easier not to miss one!)

I cut&paste the astrometric solution block to the spreadsheet, and convert the text to numerical entries (Text to Columns function).

The position angle is inserted too, along with the name of the object and my own image identifier.

Finally comes a bit of experimentation: the margin around the image in terms of degrees, in the bottom left and top right corners. This usually needs adjustment to show a good framing with respect to recognisable objects.

To generate the PDF, the script listed in the spreadsheet is copied and pasted directly into the teminal window (assuming the current directory is the one where the various external files are located).

Finally I do a bit of postprocessing of the PDF in Illustrator, mostly to ensure the Bayer letter (the Greek ones) are not hidden by the black circles reprsenting the magnitudes of the brighter stars, and so that the positions of any star names are optimised.

The external files are:

which provides boundary lines between the constellations

which provides the lines of stick figures representing the constellations; this variant developed by Sky and Telescope magazine

places the constellaation name near the centre of each constllation. These sometimes have to be adjusted in post-processing

the location and magnitude of all stars with a magnitude less than 6.5 (brighter stars have a smaller numerical value of magnitude). The file includes the inverse of the RA in degrees, as well as a calculated size for the symbol as a function of magnitude

the names of all named stars brighter than 6.5 magnitude, at positions slightly offset from the star position

Finally there are some legend and logo files.

I can’t upload the spreadsheet file (non-allowed extension) so here is a DropBox link: https://www.dropbox.com/s/ubbw07p478u1dra/ID-2022-02%20MakeImageLocationFile.xlsx?dl=0

The example in the image is the postprocessed one, by the way.

That’s interesting ! I’d be curious to see what the script roughly looks like

Check the spreadsheet in the DropBox link

Thanks for sharing! Supercool!

This particular example ends up with this script: